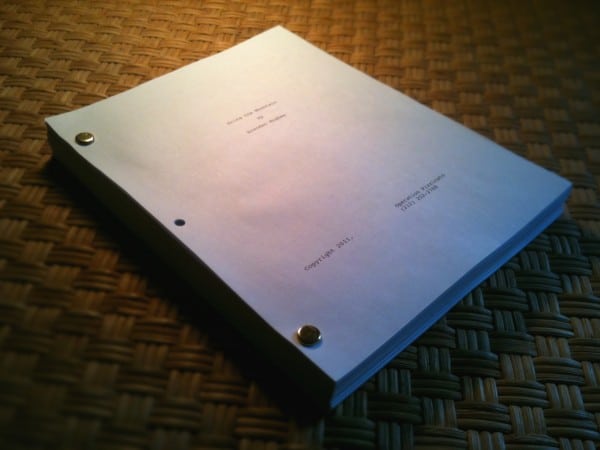 We all know that Hollywood makes the best movies in the world. We also know a great movie comes from a great screenplay. That’s why many movie industries all over the world try to attain Hollywood standard. Nollywood is not an exception.

A page is equal to one minute of screen time in a screenplay. According to John August, a screenplay should be between 110 and 120 pages. Although it’s not compulsory, it makes the script have a professional feel.

In Nollywood, the shorter the screenplay, the better and the faster you get to sell it. An average Nollywood movie runs for one hour, thirty minutes, which means 90 pages. But most movies, especially the low budget ones, run far lesser than that. And most of our movies are low budget. In fact, they don’t have more than 60 or 65 pages. So if you want to sell your screenplay in Nollywood, don’t go and write one million pages.

Most Hollywood movies have more actions than dialogue. So they don’t have any problem putting creative stunts in their screenplays. This means fighting underwater, getting into a shooting spree with the police, shooting into a large crowd, jumping from tall buildings, performing different forms of Kung Fu, walking on top of cars in a long traffic, and so on.

Nollywood doesn’t like complicated stunts like that. We prefer softer genres with little or no risky stunts. We never reach that level. Besides, they cost so much money and time. And the last thing a Nollywood producer wants is to spend too much. That’s why you hardly see Nollywood action movies and you definitely don’t see Nollywood Sci-fi movies.

A Hollywood screenplay takes about 6 to 12 weeks to complete. That’s the time to research, draft a story, write the treatment and then write a spec script.

This is not the case in Nollywood. The faster, the better. A Nollywood script takes 2 to 3 weeks to complete. I’ve once written a screenplay in a week. Most producers don’t bother about treatment or synopsis. If you want to be relevant in Nollywood as a screenwriter, learn how to write fast.

A screenwriter is always conscious of the budget. Hollywood, for all their big financial investments, is very much conscious of budgeting. The general rule is the lower the budget, the faster you get to sell your screenplay.

But we should remember that most of our so called big budget Nollywood movies are actually low budget in Hollywood. So it will be a huge mistake to assume Hollywood budget as a yard stick to writing a Nollywood screenplay. Don’t do it. It may not work out well for you.

#5. Giving your script to a producer to read and buy.

This is a serious no, no in Nollywood. While it may be one of the effective ways to sell your script fast in Hollywood, it is potential heartbreaking disaster in Nollywood. We’ve heard stories where some producers will read some scripts, refuse to buy them and the next thing is you’ll see those same stories on the screen.

Besides, most Hollywood screenplays are covered with copyrights. The screenwriters belong to strong organizations that watch out for them. We don’t have such here in Nigeria. Even if they exist, they are not as effective as they should be. Therefore, the last thing you should do is give your screenplay to a producer without payment first. Don’t try it.

These are the tips from successful Hollywood screenplay that may not work in Nollywood. Does it mean you can’t apply these tips? Of course not. You can produce your own movies or go into partnership with other like-minded producers and apply these tips, showing everyone it’s possible. So long as you’re limited to writing and selling your screenplays, you have to play ball. But don’t worry. Change is constant and Nollywood is changing for the better every year. Perhaps a time will come when the whole movie industry world will look up to us for inspiration as they’re looking to Hollywood right now.