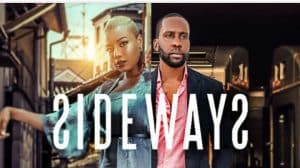 Not predictable from the title

Movie is a copy/paste job, story is from a Hollywood movie

SIDEWAYS is a romantic comedy from Az-Don Entertainment in association with ROK Studios. It is now showing on IrokoTv.

This is why I don’t like Nollywood movies. If you’ve seen Pretty Woman (1990), you will immediately know the similarities. While the movie is a classic, SIDEWAYS is the embarrassing copy cat. Nancy Isime plays Julia Robert’s iconic Vivian Ward character as Ayah. Ray Emodi plays Richard Gere’s charming Edward Lewis as Duncan.

The movie starts with Duncan driving through the streets on his way to Festac, Lagos Nigeria. He stops to ask Aya, a beautiful outspoken prostitute, for direction. She succeeds in convincing him to hire her for the night and if you’ve seen Pretty Woman, you know the rest of the story.

There’s no pretense at all where SIDEWAYS was copied from. Apart from some little alterations here and there, the rest of the movie is a complete clone of the original movie. And it isn’t even a good movie. Not even the hilarious actions of Aya’s prostitute friends and roommates, Cherry and Pinkie, can endear the movie to our hearts.

The acting is below average. Nancy as the lead female character doesn’t live up to expectation. She is a far cry from the bomb that was Julia Roberts. Probably because the plot is poor and lacks definition. Emodi tries to be the classy wealthy guy but comes across as very stiff. There’s little consistent elegance in his acting.

The video quality is the same as the typical Nollywood low budget movie – very dismal. The sound is the same. It is too bad to be called wack.

In fact, SIDEWAYS looks like a last minute effort by the cast and crew because they’ve run out of ideas but still want to make a movie. Very disappointing as Nollywood should be way past this at the level it has attained.

SIDEWAYS isn’t without it’s merits. First, you cannot predict the movie from the title, a big feat considering that many Nollywood movies, including the high budgets, are guilty of this. This movie manages to make us curious with its title.

Debby Emokpaire and Etinosa Idemudia who played Pinkie and Cherry respectively are refreshingly hilarious and manage to not tick us off completely till the end of the movie.

Over all, SIDEWAYS is 3/10. Here is hoping that Hollywood doesn’t find it and call out the producer for sullying the critical acclaim of one of the most amazing movies in the industry with this embarrassing copy.

Do you agree with this review? Let us know in the comment section. Please don’t forget to share.