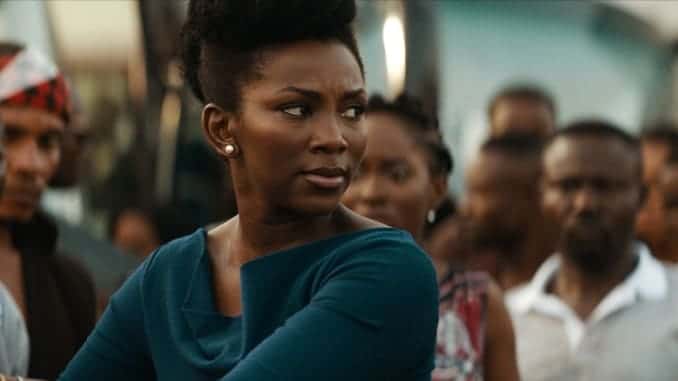 So we woke up on Tuesday morning to the news that Genvieve Nnaji’s Lionheart has been disqualified by the Oscars for having ‘too much English’. We were mad, we were devastated. GINI! Our own Genevieve’s Lionheart DISQUALIFIED?! MBANU!

Lionheart is a 95-minute drama that tells a story of a young lady who takes over her ill father’s transportation business and faces the unexpected challenges that come with it. The movie was Genevieve’s directorial debut and already made history by becoming the first Nigerian movie to gross over a billion naira after Netflix bought it for above 3 million dollars.

You can imagine our excitement. This wasn’t just another historical feather in Genevieve’s cap. Lionheart’s nomination represented for us a light in suffocating darkness called Nigeria. A beacon of hope that something good can actually come out of this godforsaken country. And that hope was dashed when the Oscars organizers cruelly threw the movie out the window.

Some, including Genevieve herself, said Oscars have no grounds to disqualify the movie because English is Nigeria’s official language. Some angrily suggested we should create our own Oscars, after all, Bob Marley and ABBA didn’t win any Grammy Awards and they remained global musical icons till date. Igbo apologists said this is what Ndi Igbo deserve for abandoning their own language in favor of foreign ‘English.’

But sentiments aside, the question is should Lionheart be entered for best international feature film in the first place? The honest answer is no. According to the Oscars organizing committee, the rule for nomination in this category is each movie must have “a predominantly non-English dialogue track.” Lionheart has only eleven minutes of spoken Igbo language.

However, Genevieve should not be blamed for entering the movie. Nigeria is a country with a diverse people and culture. Any Nollywood filmmaker knows English language movies have wider reach and acceptance than indigenous language movies. That is why Yoruba films cater to Yoruba speaking audience. Kannywood (Hausa) movies cater to Hausa speaking audience, Igbo movies to the Igbos and so on. Hence, Lionheart’s disqualification automatically means there is no hope for these indigenous language movies ever reaching the Oscars when they can’t even make it to other tribes within the country.

On the other hand, we should understand the Oscars for doing what they did. Allowing Lionheart into the best international feature film category, formerly known as foreign film category will create a lot of problems for the academy.

According to film critic, Guy Lodge, “If you permit an English language film from Nigeria to compete, then you have to permit English language films from the UK, Canada, Australia, etc, to compete. If you do that, the category’s purpose in giving a platform to under-represented cinema is effectively compromised.”

You see, it is a very dicey situation that Oscar Academy was trying to avoid with Genevieve’s movie. It is not a matter of discrimination as a lot of people were trying to imply. Totsi, a South African movie, won the best international feature film in 2006 and it was written in a mixture of Zulu, Xhosa, Africaans and English. As a matter of fact, most of the dialogue was in South African criminal slang which isn’t the English Language we understand and had to be subtitled.

So now what? Does it mean there’s no hope for Nollywood movies in winning the Oscars? Of course not! What Lionheart disqualification means to us should be quite the opposite. It means we have already grabbed the world’s attention. Genevieve, who by the way deserves an oscar, has set the pace. Lionheart ordeal should be an eye opener. As much as we are an English speaking country, we shouldn’t leave Nigerian indigenous languages to Nigerians alone.

Let us make more Nigerian indigenous language movies and support them. Let us give more details to these movies by making better production qualities. Nigeria has a lot of beautiful stories that the world is yet to hear.

The world wants to see our contents. They crave our originality, our identity. And one of the things that identifies us is our language. Yes, it’s not going to be easy considering the fact that there is little or no input from the Nigerian government to promote our movies. But are we not Naija again? If ordinary jollof rice could grab the world’s attention to us, is it our movies that cannot win Oscars?