A Toast to Heartbreak 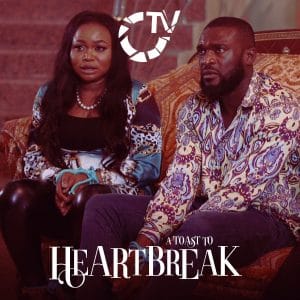 Unique, intriguing plot despite the storyline being common

Very nice use of soundtrack

Grammatical blunders by actor, should have re-shot the scenes where they happened

Unrealistic scenarios played out in the plot

Disappointing ending. Audience is left with a bad taste in their mouths

A Toast to Heartbreak is a romantic drama from the stable of Mercy Obaka Films in collaboration with Ruth Kadiri Productions and ROK Studios. It’s currently showing on IrokoTV.

A Toast to Heartbreak is a story that many women are very familiar with. Women are very soft by nature. When a guy like Michael succeeds in getting to a woman’s soft spot, he has her and everything that she possesses. And when that relationship gets to an end as it always does, the woman is left feeling like a fool.

The movie paints a lot of interesting pictures, most especially from a woman’s angle. A Toast to Heartbreak singles out three types of women and their different ways of reacting to heartbreak. The naive and long suffering (Mila), the bad bitch (Theresa) and the crazy one (Elena). Questions are raised about why women allow themselves to be manipulated even when the truth is staring them in the face.

For instance, why would a full grown woman date a guy for six years, abort four pregnancies? She finds out he’s been cheating.  And she still accepts to marry him when he proposes in front of his side chick, who by the way, doesn’t know she’s one? And why would these aggrieved women fight with one another over the same man who cheated on all of them?

These are occurrences that happen in our society where a man is regarded as a hot cake despite his unsavory baggage. And the movie shows us what it is like to experience something like this and maybe make ladies in these situations re-evaluate their relationships.

The storyline may not be original but the plot is unique in its simplicity. There’s no boring moment and the tension is palpable which is great.

The acting is the selling point of the movie considering that all of the movie depended on the performances of the actors. Moyo Lawal is the best. Kenneth did very well and together with Ruth and Mercy, they all were able to keep us interested in the movie till the end.

Again, A Toast to Heartbreak is one of the few Nollywood movies that actually knows how to use a sound track. The creative way of involving the characters in the first few minutes of the movie added a major spice to the movie from the beginning. This is a big step away from what the audience is used to from the usual monotonic, melancholic, boring keyboard renditions in most Nollywood movies. The video and sound are sharp and clear.

The acting is not without some flaws. Few grammatical blunders by Mercy are cringe worthy. The director should have done another take of the scenes where they occurred. Little blunders like that are known to spoil a good movie. Kenneth’s performance is fine but at a point it feels like he is doing a stage performance, especially at some of his Michael and Elena’s flashback scenes.

Some of the actions are unrealistic. A man turns a woman’s head with the sweetest word, she gets pregnant for him. Then she finds out it’s been all a lie and as crazy as she is, she only threatens him with a gun and that’s it! In real life, a character like Elena would have done more than that. She would have made sure a man like Michael would be punished for his manipulation, no matter how brief. Only Theresa manages to actually act like a bad bitch she is by knocking him and Elena unconscious. There is also the clumsy scene where Theresa takes the gun from Elena. They should have done better.

However, the biggest problem of A Toast to Heartbreak is the ending and the overall message to the audience. For a movie with so much tension, the ending is disappointing. Perhaps, Ruth’s intention is to raise societal questions regarding romantic relationships and leave the answer to the audience to decide. All the same, there’s no real closure. Instead, it leaves the audience confused and disappointed.

Michael’s motives behind his philandering isn’t handled well. His character leaves the impression that there’s no reason why a man cheats on his partner apart from he’s a man. Ruth succeeds in showing women as casualties of men’s infidelity but leaves the men’s side unclear apart from the obvious. There’s no deep insight into these men’s infidelity except that they are misogynistic cheats.

Michael’s story is left unfinished. Unfortunately, we will never finish it. We can only leave him with his ‘curses’. And speaking of curses, that text at the end is very unprofessional and annoying.

Overall, the movie is 7/10. It was a good movie. It could have been perfect if the producer dug deeper into the issue of infidelity on the men’s part.