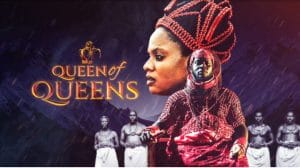 Teaches some lessons on modern feminism

Outstanding performance from the lead actress

Below average video and audio quality

Bad acting by some actors

Bad voice over, especially at the beginning

QUEEN OF QUEENS is an epic/historical movie about the legendary Queen Iden, wife of Oba Ewakpe the great, who ruled the ancient kingdom of Benin in about 1700. The movie comes from the stable of SCRIPTSHOP. It is now showing on IrokoTv.

Queen Iden represents an embodiment of what an African woman is expected to be- submissive, humble, kind, caring, homely, faithful and unassuming. But during the course of her husband’s tyrannical reign and subsequent revolt of the people, she proves to be beyond the stereotype. She shows uncanny courage, wisdom and the rare willingness to be the sacrificial ‘Jesus’ of her time. In this time when the women rights and emancipation is becoming very popular, we can learn important lessons from QUEEN OF QUEENS. Every woman mustn’t be the very outspoken Maya Angelou or Chimamanda Adichie. But women can emulate the humble and courageous Queen Iden and still be no less effective.

Cultural heritage is the unique signature of the Benin people. Monarchy, songs, dance, history, language, costume and make up, name them. The list is endless. And QUEEN OF QUEENS captures them all. Part of the charm of the movie is how everything appears. There’s no excessive attempt at embellishment that seem to characterize most epic/cultural/ historical Nollywood movies. QUEEN OF QUEENS is simply natural.

Proverbs are the oil with which words are eaten according to Chinua Achebe. QUEEN OF QUEENS confirms the truthfulness of that notion. The movie is rich, witty, on point with proverbs which makes the dialogue flow smoothly. As a matter of fact, there is no dull moment. Each scene comes with its own uniqueness.

Matilda Obaseki must be commended for her fantastic performance in her role as Queen Iden. Her ability to fully capture the character and bring it vividly to the audience deserve a big thumbs up. Watching her play the role of Iden brings tears to the eye. We are forced to feel for the great woman who gave up everything so the Benin monarchy can remain.

As rich as the plot of QUEEN OF QUEENS is, there are some really annoying occurrences. The audio and video quality are quite below average. Many Nollywood movies are terrible at voice overs and subtitling. QUEEN OF QUEENS seems not to have been able to break the jinx.

Some actors should be commended for their good performances while some leave a lot to be desired. These actors seem to forget that stage acting is different from acting in front of the camera. Exaggerated acts are best left on stage.

Also, grammatical blunders occurred in certain cases. We understand that the English language is not our mother tongue but that doesn’t mean errors like that should be condoned.

Over all, QUEEN OF QUEENS is rated 7/10. As much as we enjoy watching the Benin culture, this movie isn’t really about that. It is about a great woman who found courage in her humility and did what had to be done for her Oba and her people. This is a lesson for all women. There is indeed a softer side of feminism. If only women know the unique feminine power they possess, they can be the firebrand or they can stoop to conquer even the hearts of heartless kings and kingdoms.