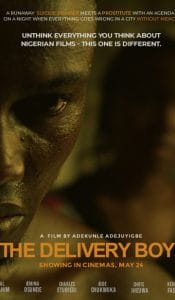 The Delivery Boy is a thriller from Something Unusual Studios. It is now showing in cinemas nationwide. A runaway teenage suicide bomber unexpectedly teams up with a young prostitute for an all night quest to discover what makes them who they are. The story begins with Amir whose birth name in the movie is Joseph, played by Jamal Ibrahim. He escapes his terrorist cell and goes on an all night long suicide revenge mission with an impromptu partner, Nkem played by Jemima Osunde.

The Delivery Boy is not your typical Nollywood movie. Nollywood tends to shy away from telling a story of this kind due to one reason or the other.  But not this one. Nodash took the bull by the horns and told some truths that should have been told a long time ago in our movies. The Delivery Boy is a bold attempt to showcase what the Nigerian society has turned into – selfish, heartless, religiously brainwashed and hypocritical. Although the setting of the movie is not clearly specified, everything about it points somewhere in the North, particularly Maiduguri which in real life has been ravaged by the Boko Haram insurgency. Through the eyes of these poor characters, we see the rot in the society and how victims have to rely on themselves to survive.

There is a common belief that darkness is evil. The Delivery Boy is shot in the dark – all night till dawn- to signify the main characters’ tortured souls. In a short time of slightly above an hour, The Delivery Boy drops important issues for us to mull over:

200 hundred school girls from Chibok Borno State, North east Nigeria, were abducted by Boko Haram sparking global outrage. Before then, hundreds of people have been bombed all over the north east by these insurgents. And till this day, they haven’t been effectively stopped. Islamic fundamentalism is a real dreadful thing which has cost a lot of lives.

The Delivery Boy gives us a peek at what insurgency really looks like. However, it chooses to tell the story from a different angle by letting us see things from the eyes of a former insurgent. After watching Amir’s chronicle of how he came to be a terrorist, we now know that maybe the people who have fallen the hands of these terrorists aren’t the only victims. Maybe the insurgents are victims as well. Victims of religious brainwashing by those who heartlessly loot and kill in the name of Islam but really to enrich themselves.

Sexual abuse is an undesired behavioral global phenomenon. Today, we are aware that abusers are usually very close to the victims. Maybe a relative or a friend. In Nkem’s case, her uncle started raping her at eight years old. Joseph was a child when his adoptive father, Mallam Sadan, sexually abused him and converted him to Islam as well as changing his name to Amir. Sometimes, victims fight against it. Nkem’s one attempt to refuse her uncle fetched her a permanently scarred face. By the time she grows into a teenager, she is a full fledged prostitute with no ambition other than saving her brother’s life. Amir’s description sums her up perfectly, “your brother may be in coma, but you (Nkem) are already dead.”

Other times, victims accept their situation and flow with it. In Amir’s words, shame makes victims loyal to their abusers. They feel they have no choice. Some even begin to enjoy their abuse, like Amir did. Sexual abuse breeds low self esteem and an unhealthy possessiveness in both the abuser and the victim.

Fighting corruption is one of the main focus of the present Muhammadu Buhari administration. Corruption is a bane of a society’s development. It is no news that it has eaten deep into the fabrics of the Nigerian society. When Nkem asks Amir to go report to the police about his assignment to bomb a hospital, his reply is the police has already been bought by “people in high places.” As in the ogas patapata of Islamic terrorists are the people in powerful positions who have sworn to protect but destroy instead. That’s to show you how deep has corruption dug into people’s heart. Sister Dorcas’ confession that she gives away little boys in her care to Mallam Sadan, an Islamic scholar and a chronic fundamentalist, because he sponsors her orphanage is a terrible thing to hear.

Nigerians have been ranked as the most religious people. It is sad to say the religious beliefs do not often reflect in their lives. People feel they are more righteous than others. No wonder Jesus condemned the Pharisees for trying to remove a speck in others’ eyes instead of working on removing the log in their own eyes. The Delivery Boy condemns hypocrisy in its entirety. The entire time Mallam Sadan appears on the scene, he is always praying and reading the Koran. Amir condemns Nkem for being a prostitute yet he is the one with an assignment to bomb a hospital and kill everyone in it.

Nigerians have suffered to the extent they don’t care about what happens to their neighbors. It’s a jungle. Only the fittest survive. Therefore, every man for himself. The Delivery Boy exemplifies that clearly by Nkem’s cold reaction to the explosives wrapped around Amir’s body. Nkem’s life has been so messed up that she doesn’t care that her new partner is about to waste so many lives with his explosives. Not until she learns that her own brother will be among the victims, that she tries to stop him. We are sure she wouldn’t have cared if he bombed the hospital to smithereens if her brother wasn’t in it.

Nodash briefly points out the electricity situation in Nigeria when a character shouted, “Up NEPA!” in the movie. We are also glad that The Delivery Boy wraps up with delivering justice. Both Mallam Sadan and Nkem’s uncle get what they deserve.

Fortunately, The Delivery Boy doesn’t have a lot of downsides. Nodash did a great job. But there are a few errors that stand out.

Jamal Ibrahim’s potrayal Amir is not really good at the final scene. We understand that Amir is a hardened former terrorist and as such, should be cold and detached. However, there is something called character development. We should have seen a little emotion when he wakes up from his injury and learns what Nkem has done.

The orphanage scene with Sister Dorcas is very clumsy. It is a dent to an otherwise perfect Nollywood movie.

The Delivery Boy is one of the best Nollywood movies of 2019 so far. The over all rating is 8 out of 10. The Delivery Boy is not just out to entertain you, but to send messages and ring the alarm bell that there is fire on the mountain. It’s unique story line and style is very refreshing. The final explosion scene indicates that Nollywood is evolving into a better and more exciting experience.

Have you seen the movie? Tell us what you think about it.