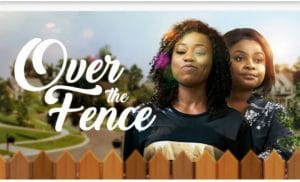 Overall acting isn't the best it should have been

Bad ending to a good story

Over The Fence is a movie from House5 Production in association with ROK Studios. It is currently showing on IrokoTV.

We’ll go straight to the upside and downside.

Over The Fence is one of those movies you at first glance and walk away because of lack of A-List actors. But you will be surprised that the movie is actually very interesting. Simple though, but interesting.

The storyline is alright. Plot structure is on point. We see the vivid character development between the uptight, classy and independent Lola and the easygoing, fun loving, dependent Sandra. And their personality clash as they contest for the position of Estate Wives Union President is quite entertaining.

As always, Bimbo Ademoye did not fail to deliver her role perfectly. Her character as Lola is the life of the story. Without her uptight, no-nonsense attitude, this movie could have been very boring. Her speech, gestures, facial expressions are crisp and precise. She was the ultimate classy and independent wife.

One of the major problems of Nollywood movies is predictability. But this movie seems to have overcome that successfully. From the cover alone, you can’t tell what the movie is all about, a far cry for most Naija movies. As the story unfolds, you can’t tell what will happen next which makes you curious enough to stay and find out. That’s a big step up as far as Nollywood is concerned.

As good as the story is, there are also implausible scenes, like the flash drive swap. Isn’t it too much of a coincidence for Lola to have the same flash drive that Sandra has which makes it possible for her to make that swap under the very noses of women? The screenwriter should have created a situation to explain this coincidence.

Apart from Bimbo’s flawless performance, the rest of the actors were just average. Not being A-List actors is not an excuse. They should have done better, particularly Ijeoma Grace Agu who played the housewife, Sandra. Her acting isn’t consistent. One moment, she is the young trophy housewife, another moment, she is just a young confused actress struggling to fit into her role. Perhaps, she looks too young for the role. Perhaps, she is inexperienced in playing a wife in movies, preferring a more comfortable young girl roles like she did in Dear Mummy B.  In any case, she doesn’t do justice to Sandra.

The technical aspects aren’t left out as we spot the boom mike through the mirror in 36:55. And the cracking sounds in some scenes. These are little errors that spoil a movie and drop ratings. Nollywood is riddled with them. And Over the Fence is unfortunately not an exception.

Finally, Over the Fence has another annoying problem of Nollywood – great plots with bad endings. The movie didn’t have a good ending. The last scene looked like any scene where a story is still running. One became disappointed when the movie ended with a scene like that.

Overall, Over the Fence is 6/10 for the general average performance.