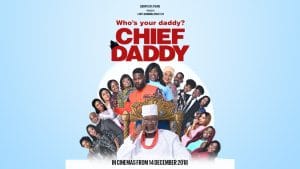 2018 came as a slow start for Nollywood. However, the story changed as the year progressed. And we witnessed many record breaking movies gracing our cinemas thanks to the amazing storylines written by some of the best screenwriters the industry has ever had.

Therefore, here are the screenwriters of the top ten Nollywood biggest box office hits of 2018.

Chief Daddy hilariously swept us off our feet grossing over 386 million naira and became the biggest box office hit of 2018 and the third Nollywood biggest box office hit after The Wedding Party 1 and The Wedding Party 2. However, the literary brain behind this movie is Bode Asiyanbi. Bode Asiyanbi is an award winning writer and Biochemist. He graduated from University of Ife. Asiyanbi won 2018 the BBC International Play-writing Competition for his play, The Journey to Fortune. This was his third award having won the prize in 2005 (Big Dialed) and 2011 (Shattered).

Kemi Adetiba is a household name in Nollywood with very successful movies under her belt. She’s the director of the record breaking highest grossing movie of all time in Nollywood cinema, The Wedding Party. King of Boys is another feather in her cap as the movie grossed over 231 million naira, becoming the second biggest box office hit in 2018 and the fourth highest grossing film of all time in Nollywood. Adetiba started out as a radio presenter on Rhythm 93.7 FM. She gradually transitioned into television productions. Today, she is a director and producer. Apparently, she’s a great screenwriter too.

Ayo ‘AY’ Makun’s movie came third grossing about 230 million naira. AY already has a string of very successful movies such as 30 Days in Atlanta, A Trip to Jamaica and 10 Days in Sun City. However, the writing credit of Merry Men goes to Kehinde Anthony Joseph. Kehinde Anthony Joseph is a screenwriter and a lecturer at Emem Isong’s Royal Arts Academy. He’s one of the most popular screenwriters in Nollywood with a lot of very successfully produced screenplays such as Falling, Spotlight, Date Night, Champagne etc.

4. Up North written by Naz Onuzo and Bunmi Ajakaiye

Up North is another successful 2018 Nollywood movie that starred Banky Wellington aka Banky W and his beautiful wife Adesuwa Etomi Wellington. It grossed more than 93 million naira, placing it at the fourth position. Naz Onuzo and Bunmi Ajakaiye are the screenwriters of this movie. Naz Onuzo is one of the founders of Inkblot Productions, a writer as well as a producer. He also wrote The Arbitration, The Department and Out of Luck. On the other hand, Bunmi Ajakaiye is director best known for directing It’s About Your Husband and My Wife and I.

5.The Ghost and The Tout written by Toyin Abraham

Toyin Abraham is one of the most popular actresses in Nollywood. Although she isn’t particularly known for screenwriting, we have to admit that she did a great job at writing The Ghost and The Tout which went ahead to gross 80 million naira in the box office. Way to go, Toyin!

Moms At War was directed by Omoni Oboli who also played one of the lead roles in the film. However, Naz Onuzo wrote the screenplay. Moms At War tells the story of two mothers who will do anything for their children and often clash as a result. The movie grossed about 65 million naira at the box office.

The movie grossed about 59 million naira at the box office. Directed by Ishayo Bako and featuring Nicole Brown, Yinka Ogun and Debo Oluwatunminu, The Royal Hibiscus Hotel was a written collaborative efforts of Priscilla Nwana and Temidayo Abudu both upcoming screenwriters and producers. Interestingly, Temidayo is the daughter of Mo Abudu, a media mogul and executive producer of The Wedding Party 1&2 and Chief Daddy.

Lately, we’ve witnessed Mike Ezuruonye, one of the most successful actors in Nollywood, transitioning into producing and directing. Apparently, the actor’s talent isn’t limited as he wrote, produced, directed and acted in Lagos Real Fake Life. And he was successful as this movie grossed over 44 million naira at Nollywood box office.

Like many actors, Adekola Odunlade, ‘meme master’ and a prolific actor in the Yoruba category has widened his creative scope in producing, directing and writing. He co-wrote The Vendor with Tunde Komolafe and Korede Ibrahim and grossed 44 million naira at the box office.

Wow, 2018 must have been a great year for Naz Onuzo as he also wrote this movie. The movie tells the story of a shop girl who suddenly finds herself a billionaire and owner of an empire that her father left her. Although the movie received mixed to bad reviews, it still manages to gross about 41 million naira at the box office clinching the tenth position of Nollywood biggest box office hits of 2018.

There you have it. So what’s the purpose of this write up? It is to show you that these screenwriters are ordinary people like us. Some of them weren’t even well known until their movies hit the cinemas and became successful. Your screenplay can be among the top Nollywood biggest box office hits if you persevere. Don’t give up. Your time will come!