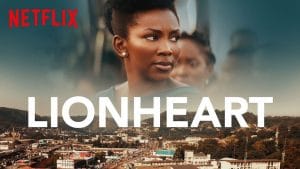 Below average acting by some actors

Little intriguing details in the plot

So, the long awaited Lionheart is finally out on Netflix and we can’t stop talking about it, mainly because the person on top is our own beloved Genevieve Nnaji. Lionheart tells the story of a young lady who has to save her father’s transportation company or risk losing it to a rival and very unpleasant company.

First of all, the movie is fantastic. Lionheart takes us through various subjects like family values, business, tribe, yahoo yahoo crimes and even a little bit of gender issues in our Nigerian society. And the ability to combine these issues and successfully squeeze them into a ninety five minute drama with no boring moment is something to be applauded. In the face of ‘not too young to run’ mantra in the Nigerian political sphere, Lionheart tells us that while it is alright to allow the young the chance to prove themselves in high profile positions, old hands will always come in handy because of their invaluable experiences.

And speaking of old hands, it is a joy to watch our veterans once again. They have shown us that they maybe old in the industry, but they haven’t lost their flavor yet. Nkem Owoh, aka Osuofia, is as hilarious as ever. Pete Edochie is the dignified father. Onyeka Onwenu is ever our sweet mummy and so many other veterans whom we’ve not seen grace the screen for a while.

The cinematography is amazing. The sound is superb. Costume and make up are on point. Lionheart is without doubt, not your typical Nollywood movie.

However, the selling point of this movie is its authenticity and simplicity. Lionheart is not too sophisticated to be unrealistic and it is not too local to be ignored. The movie is just real. Watching the actors transit from Igbo to English and then to Hausa back to English makes you believe you’re part of their conversations that you have to join.

The acting is great. But some of the actors somehow fell below expectations. Peter Okoye of the former P-Square group is quietly transitioning into the movie industry. However, his acting in Lionheart has clearly shown that he’s better off singing and dancing than acting. Nevertheless, it is too early to judge his acting abilities. Let’s hope he will do better next time he appears in another movie.

We already know Genevieve is a fantastic actor. And her graceful role as Adaeze is a joy to behold. But there’s nothing new in her acting. She’s still the same cool headed, high class, sophisticated young lady, just like her roles in other past movies. We expected more from her. Unfortunately, we didn’t get it. She simply played safe.

Again, Lionheart promises us a very intriguing storyline. Here’s a brilliant young lady who suddenly finds herself in the middle of a big mess her father had created in his transportation business. What we expected to see was captivating details about how she is able to overcome the mess with her uncle’s help. But what we saw was glossed over details with a happy ending. The intriguing parts were touched but they weren’t grasped firmly.

Over all, Lionheart is rated 8/10. As Genevieve’s directorial debut, the movie has shown that there’s more to this screen diva than just acting and a pretty face. Genevieve did a great job and we can’t wait to see her directorial prowess in her next movie.   Well done, Genny!