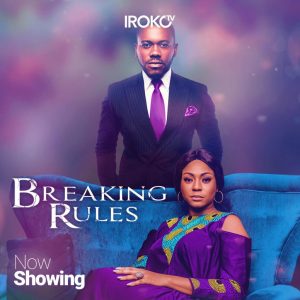 Breaking Rules is a romantic movie from ROK Studios. It is currently screening on IrokoTV. It is a story that explores the common concept of playboys who bet on bedding a lady “who is not on their level” and the attendant consequences.

“You don’t know who you might meet” pretty much sums up Breaking Rules. However, the one thing going for the movie is the acting. The development of the lead characters is awesome. Enado Odigie brought out her best in her role as Vivian. We see her character morph from an uptight, career driven young lady, to a girl in love. Then she becomes a confused jilted lover, back to a sweet girl in love before she eventually settles into an older, wiser, warmer woman. If you are a lady, you can’t help but feel you’re Vivian. That’s good acting – the ability to evoke empathetic feelings in the audience.

Adeyemi Okalawon is also awesome in his role as well. Though he is not exactly new in his playboy role as evidenced in how he plays it effortlessly. But that’s not surprising considering that he often plays these kind of roles in his movies. Check Dinner. He and the rest of the cast, Yvonne, Seun etc should be commended for making the audience not sleep throughout the duration of the movie.

Apart from the fact that Breaking Rules is predictable, the storyline has been produced over and over again in the entire history of Nollywood. As Nollywood is developing rapidly, one would expect that it would produce something more creative and authentic. Alas, this is not the case.

Let’s face it, who hasn’t seen a movie where a guy bets a large sum of money with his friends on a seemingly untouchable beautiful lady? And the lady in question falls for it? Seriously? This story has been told over and over again until it is as boring as hell. To a keen observer, the producers played it safe. They didn’t want to get out of the box and bring something fresh.

Don’t get this wrong. There’s nothing wrong with recycling a movie. It’s a common occurrence in movie industries all over the world including Hollywood. For instance, Olympus has Fallen and White House Down. But everything is wrong when there’s no visible effort to spice it up to look a little different.

The sound track is another problem. What is it with Nollywood and dull keyboard soundtracks? Gosh! It’s common in Nollywood movies that through sound tracks, one gets to know how a movie ends before one gets to the end. Breaking Rules is not different. And “sometimes your heart needs more time/to accept what your mind already knows…” What is that?

We already know the acting is great. But one person wanted to spoil the show. The lady that plays Vivian’s secretary or whatever in 18:23 of the movie. The lady has a great stage voice but the recitation of her lines for the camera doesn’t cut it at all.

The pace is average. The accident scene in 59:45 of the movie is clumsy. The costume ad make-up is fine. But who wears pajamas and make up to sleep at night? Certainly not a character like Vivian. Unless the producers want to portray her as a bush girl which she is not.

Over all, the movie rating is 6. There’s nothing new about the storyline. The irony of Breaking Rules is it doesn’t break any rules in Nollywood film production.