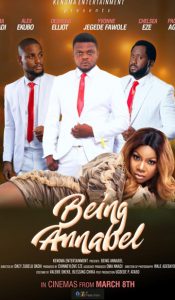 Issues based on the ills of the society today

Inconsistent diction from Oma as Annabel

Being Annabel is a drama currently showing on cinemas nationwide. It is a movie that centers on murder, guilt, depression, suicide and identity theft.

“Be careful what you wish for,” says the soundtrack of the movie. Suicide is becoming an unsavory epidemic in Nigeria in recent times. And it’s no longer news that the Third Mainland Bridge is a hot bed of many suicides. Hence it seems fitting that Being Annabel’s main action begins with the bridge, setting the pace for the rest of the movie.

Some of us look up to the rich and envy them for their privileged lifestyles. However, what we fail to understand is that the rich are humans like us. They also cry. Some wonder why such is the case, why they go as far as committing suicide while they have everything that money can buy. It is only when we step into their shoes like Emma did that we understand all that glitters is not gold. That’s the take home message that the movie gives us.

Again, we cannot overlook the outstanding performances by the actors. Oma Nnadi did wonderfully well as a female lead. Desmond Elliot is an old hand in the business. So, we don’t expect anything less than a perfect performance. Ken Erics also delivered well. But I think the greatest accolade should go to Alex Ekubo. It’s so refreshing to watch him step away from his usual playboy stereotyped role and bring something new and fresh. And he nailed it.

At first glance, Being Annabel may seem like your typical boring Nollywood movie, most especially at the first scene. But it’s not. One major thing that gets the story going is it’s consistency. You are compelled to sit back and watch what happens scene after scene.

A few anomalies threatened to spoil the beauty of this movie. For instance, the first scene at the police interrogation room was very clumsy. It set Being Annabel off as very amateur. However, the next scene put the movie on the right track and everything was fine from there.

Secondly, while we praise the story line for it’s consistency, the same can’t be said about the audio quality. It was mostly fine but there were few cases where the audio was either too loud or not loud enough.

Oma’s diction as Annabelle was not that great. Annabelle is supposed to be an educated, classy woman of the upper class and to be fair, she sounded like that most of the time. But in visual performances such as this, consistency is the key. In this case, Annabelle sometimes sounds like a woman who is trying to blend into the upper class which is what her twin Emma is supposed to do and did.

Overall, Being Annabel is an example of not judging a book by its cover until you’ve read the contents. The movie may not have The Wedding Party’s successful hype at the box office but I see it as a silent box office hit. Therefore, Being Annabel should be highly recommended to all movie goers.

Have you seen the movie? Tell us what you think.